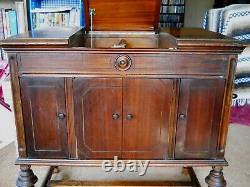 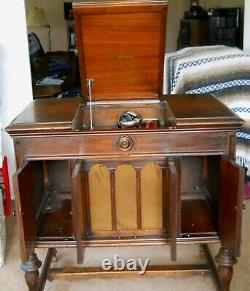 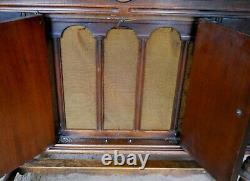 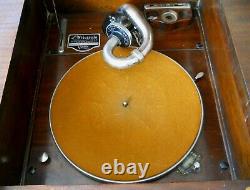 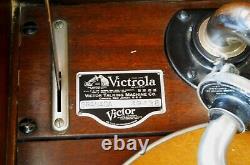 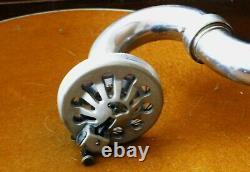 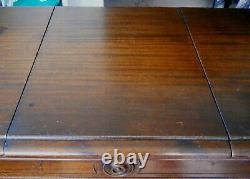 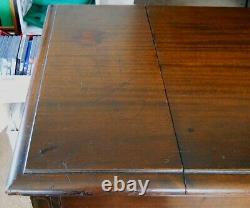 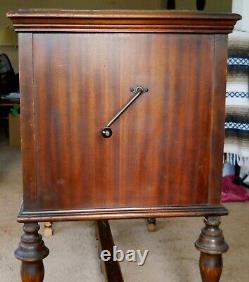 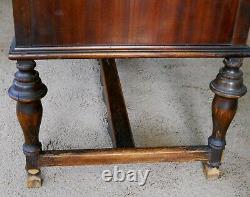 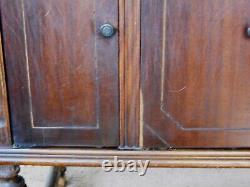 This is a good working Victor Victrola, the Granada model from 1927. Its an Orthophonic model with the improved curved built in wooden internal horn and the Orthophonic reproducer. These were great improvements over earlier acoustic designs and were pretty much state-of-the-art until electric machines came out a few years later. The console design had advantages over the upright models.

On both sides of the turntable are ledges for stacking records before playing, and side pockets next to the grill for storage of record albums. It measures about 34" wide, 33 1/2" high and 22 deep.

Mechanically, this machine is in very good working condition. I bought it many years ago and have taken care of it.

It plays well and the speed control works. The cabinet is in pretty good condition with just a little peeling of the veneer on the front, but the sides and back look good. The legs show some age (see pics) and feet have the bulbous bottoms missing from the legs. This was one of the popular Spanish styled machines Victor put out in the 1920s and the feet looked like bulbs.

NOTE: the pieces of these bulbs are included. It looks like they came unglued before I bought it but have been kept with the machine. I was going to glue them back on but never got around to it. Included are several packs of steel needles which come in handy since you should replace them after every record play. The acoustic records had a kind of hard shellac or varnish on the surface, and the needles were made of soft steel.

They wear down after one or two plays which saves the records. Its easier to replace needles than records. They come in Loud, Medium and Soft tone sizes (different thicknesses). I recommend medium tone for most records. Ou also get a copy of the original owners manual which contains maintenance guidelines for the working parts. Located in Princeton West Virginia--100 miles south of Charleston WV, 100 miles NW of Roanoke VA. I've had this Victrola listed for many months now without a sale so I won't be relisting it if it fails to sell this month. If you've watched my auctions you'll see many items have been removed because I'm setting up in a local large flea market co-op and many items will be going there--especially the items that have been listed for months (or years) with no action here: black powder ball starters, records, CDs, rifle stock and other things.

The item "VICTOR Orthophonic Victrola 1927 Granada 78 rpm Phonograph Player" is in sale since Thursday, May 20, 2021. This item is in the category "Collectibles\Radio, Phonograph, TV, Phone\Phonographs, Accessories\Victor Phonographs". The seller is "cinemajim" and is located in Princeton, West Virginia.